Roy Lamb, a former RNZ reporter, was in New York on the day of the September 11, 2001, attacks and found himself “witnessing.” 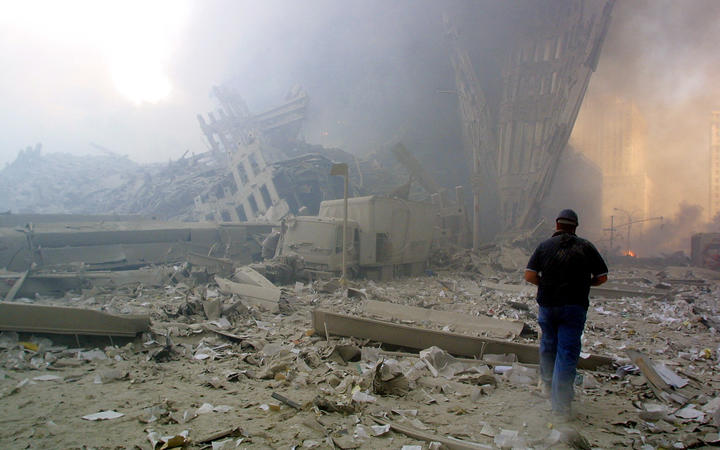 A man walks through the rubble after the collapse of New York’s first World Trade Center tower on September 11, 2001.
Image: AFP / Doug Kanter

Two planes hijacked by Islamic extremist group al-Qaeda terrorists flew into the World Trade Center in New York City, a third crashed into the Pentagon just outside Washington DC, and a fourth crashed into a field in Shanks Valley, Pennsylvania. Collapsed and destroyed

The twin towers collapsed in the deadliest foreign attack on American soil, killing at least 3,000 people.

She told the Korean Dean she was at a meeting when news of the attack on the World Trade Center broke and she passed through Manhattan and arrived at the site with a colleague.

“Everything was upside down, everything was different, the busy streets you would normally see in New York stopped.”

“There were cars parked idle, everyone was anxious for information, they had car radios, people were lighting candles at the foot of the church.

“It was a growing wave of people who were very upset, there was dirt and dust, and some of them were addicted to bile as they walked upstairs.

“Who would have thought in those days that people would turn heavy jumbo jets full of passengers into bombs.”

She joined a group of rescuers and locals using the same phone to get the news.

“We would just stand in line and whenever I came in front of the line I would play Radio New Zealand.” When she arrived at the RNZ, it was broadcast on the Morning Report and gave an eyewitness report.

“It was really witnessing something, it was a matter of seeing, hearing and then reporting.”

As the hours progressed the sense of futility and despair as it became clear that no one else would come out of the towers.

“Everyone wanted to help, and there was no one to help.”

Lamb said she has returned to New York three times but has never returned to Ground Zero.

“My daughter, who is now 10 years old at the time, went to the memorial and told me it was really good, it was done very sensitively,” he said.